Road trip.  With the temps in the lower 80s, we thought today would be a great day for the beach and a great day it was.  We packed up the pups and headed out.

The first thing hubby wanted to do was drive on the beach.  For a daily fee of $20, we could drive out on the sand and stay until 5 pm.  It’s December and gets dark early so they want everyone off the beach by dusk.   Hubby had on his Penn State ball cap.  The attendant seeing the ball cap asked right away if we were from Pennsylvania.  The very friendly attendant taking our money had relatives that lived in Pittsburgh. 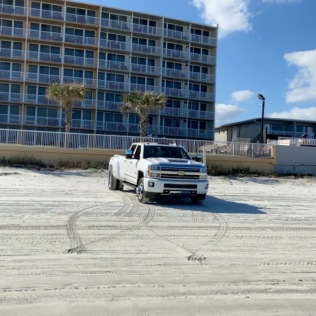 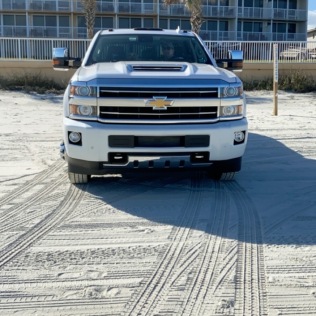 Since puppies were not allowed on the beach, hubby sat in the truck with the pups while I strolled along the beach taking pictures.  I did not get my toes wet so I do not know the temperature of the ocean water but there were people swimming in the ocean.  Both adults and children were out there.  We assumed these people were from the northern states as people from Florida would think us beachgoers are crazy.

Even though the temps were in the low 80s, it was windy and the air was chilly.

All in all, it was a nice day at the beach.

Follow Glamping in my RV on WordPress.com
Join 180 other subscribers